A unisex hairdresser’s salon; a young chap there getting his hair gelled and spiked (or whatever.) On the pavement by the door, waiting for collection, an empty five gallon drum of rape oil. Weird place, London. At the British Museum I watched an elegantly attired lady sitting, posing for the camera; right next to the signs which said ‘Emergency exit,’ and ‘Do not sit on the steps.’ But it’s the phones that get me. What is it with Londoners and mobile phones? Thirty or forty years ago I remember seeing a guy walk down the street in Reading. Speaking loudly, gesticulating wildly, people were giving him a wide berth until two policemen gently took him off to one side and waited for an ambulance to collect him. Now there’s scores of them, all babbling on their phones, but why do they gesticulate as they’re talking? But at least the gesticulating ones are looking about them. Next time I go down to London I’m getting a chest harness. On it, facing forward, I’m mounting a long spring and a boxing glove. Perhaps that will stop people walking into me because they didn’t see me. Anyone who knows me knows that I’m hardly the smallest person you’re likely to meet. Mind you the prize for ignoring me goes to the woman towing her suitcase on wheels with one hand, texting with the other. She walked straight through the crowd and across the front of me. It was like being cut up at a roundabout by an artic! A mate of mine once went sprawling in a similar situation, I was just lucky. Then there was the lass on the bus. I was crossing the road at some traffic lights and made it to the island in the middle. Fine so far! Then a bus, turning right, stopped immediately in front of me. There in front of me were an assortment of passengers, reading, playing with their phones, staring into space, or even chatting. Fair enough, all human life is here. But the lass directly in front of me was wearing the earphones from her phone, which is fair enough, not everybody wants to share your music. But she had the lead from her earphones in her mouth and she was sucking and chewing it. Does that indicate her mother didn’t breast feed her long enough, or did she allow her to breast feed too long? But the thing that really does get me about London isn’t entirely a London problem. They really shouldn’t allow women of a certain height to have umbrellas. If they do, when they walk, head bowed against the rain, the spikes on the umbrella are just the same height as my eyes. Normally, with eyes fixed on the floor, they do at least notice my feet and legs before they hit me in the face with the spikes. But as I made my way along the rain soaked pavement I was forced to take rapid evasive action to avoid two women who, oblivious to the world around them, were holding their umbrellas in one hand and were texting with the other. I did the only thing a reasonable man could do. I made my way to Euston and got the next train back to civilisation.

And a book to read on the train?

As a reviewer commented “50 year old Benor is back in his home city of Toelar, enjoying a quiet life of roof running, paramouring, etc, when one day his routine gets disturbed, making a fast getaway necessary.
However, his escape route is blocked by an Urlan Knight.
Fortunately, the said Knight saves Benor’s life, without even unsheathing his sword, by just being there.
Unfortunately, the said Knight has been looking for Benor and has a little proposition to make.
And so it begins…”

Normally it’s just my ramblings you get here, but MTM mentioned that the next book(s) in her trilogy are coming close to publishing. As I’ve bought and enjoyed the first two and an looking forward to the next, I was pleased and interested. So I’ll let her tell you about it in her own words.

Hello there. I’ve stolen Jim’s blog to do a cover reveal for the last two books in the trilogy I’m writing, the K’Barthan trilogy.

Doing the cover is definitely one of the things I most enjoy about publishing my own stuff. I use a firm of truly excellent designers; A Trouble Halved, in Stratford Upon Avon – http://www.athdesign.co.uk. They are magic and we have a history – they did, still do, I think, most of the design work for one of the companies I worked for. These lovely pictures are the result. My aim is to produce artwork that reflects the quality of the product inside, so now I have this, I’ll have to make sure the books live up to it. No pressure then. Phnark..

So, the K’Barthan Trilogy is about a young outlaw living in a despotic regime in a parallel reality. He has, literally, eyes in the back of his head and, coupled with the fact he’s a terrible coward, this makes him very good at running away, so he becomes a getaway driver. Here’s the official blurb.

All he wants is a quiet life, but he has an unfortunate tendency to complicate things for himself; he falls for a woman living in a different version reality to his, for starters. He also has a knack of getting himself noticed by the wrong people. As a result, his efforts to exist humbly and unobtrusively, and to woo his love, merely get him into deeper and deeper trouble, dragging both her, and his friends, along with him.

As Government forces close in on him, The Pan does what comes naturally to his cowardly nature; he takes to his heels. But the time comes when there is nowhere left to run. He must stand up for his beliefs, face his demons and rectify the chaos he has caused, or die trying.

There are bad jokes, silly names, an unspeakable baddie, flying cars, flying car chases, fights and a smattering of romance. There might even be the odd universal truth buried in there somewhere but if there is, it’s only by mistake.

The two books we’re looking at are:-

One Man: No Plan, K’Barthan Trilogy: Part 3 is due out on 27th April 2014)
Confused ex outlaw, pardoned for all misdemeanours, seeks answers…

The Pan of Hamgee has a chance to go straight, but it’s been so long that he’s almost forgotten how. With a death warrant over his head he is released, given a State sponsored business, and a year’s amnesty for all misdemeanours while he adjusts.

He doesn’t have a year, though. In only five days Lord Vernon gains total power. Unless The Pan can stop him, K’Barth is doomed. The future hangs by a thread, and the only person who can fix it is The Pan: a man without a plan.

Asking For Trouble, K’Barthan Trilogy: Part 4 (due out 24th May 2014)
Cornered Hamgeean, with nowhere left to run, seeks time…

The time has finally come when The Pan must stand up and be counted. He must face his demons and rectify the chaos he has caused. He can stop Lord Vernon, and he’s going to, but the timing is crucial.

To succeed he has to stay alive, a possibility if he keeps his head down and maintains a low profile. But that’s not an easy task for The Pan.

If you’d like to find out more about the K’Barthan Trilogy or stalk M T McGuire on social media you can find her at any one of these places.

Twitter: @mtmcguireauthor
Twitter profile for easy following http://bit.ly/1a41QoT
Facebook: http://on.fb.me/1d86hC5
Goodreads: http://bit.ly/1fNn1Q4
Pintarest: http://bit.ly/1b3p0dk
Tumblr: http://bit.ly/170MG31 caveat from M T, I’ve no idea what to do with Tumblr but wordpress offered to add my blog posts and it seemed churlish to refuse. 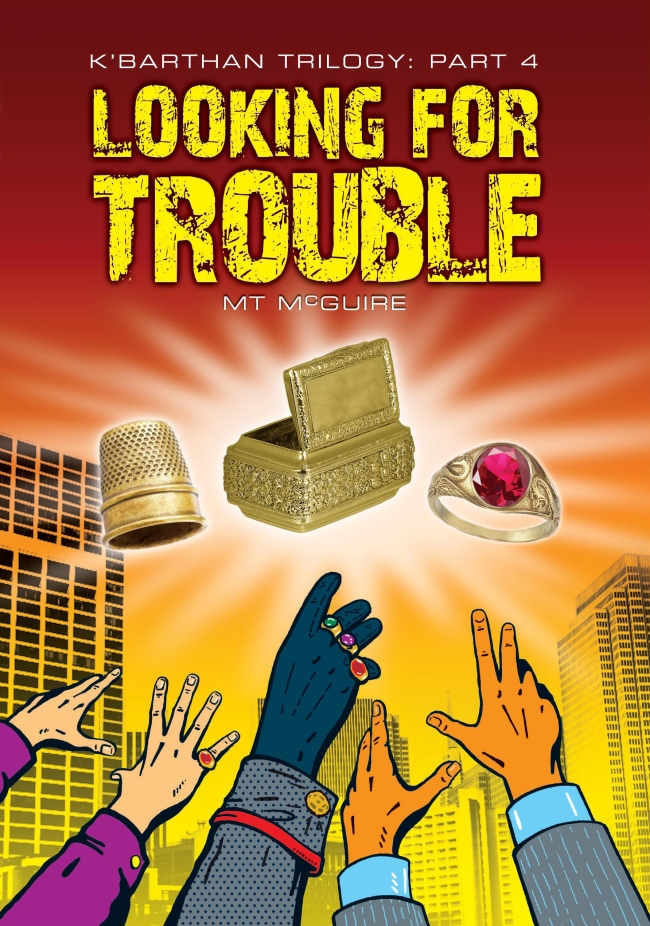 After the first three thousand years we’ve about got it right.

It’s winter, it isn’t raining, and I’ve been laying a hedge again. (Actually round here we call them dykes, but if I write about laying dikes I’d probably crash google in the USA.)
But no, I’ve just finished laying a hedge that my grandfather never got round to. The weather has been atrocious, at times I’ve gone down when the wind’s dropped, done the next length and hastily hammered stakes in and secured the laid hedge to them because otherwise they’d have been blown away.
And water? One reason for doing this length of hedge is that if I do, next door can clean the gutter out on his side and it’ll drain both fields a bit and do a bit of good for both of us. It’s not something new or contemporary; indeed it’s something farmers will have been doing for at least three thousand years. Most of the tools haven’t changed a lot, save that steel is probably better than bronze, and frankly a chainsaw is better than an axe for some jobs.
So buggerlugs here has been trimming elderly hawthorn with a chainsaw, dragging the stuff I’ve cleared out across the sodden ground, often in standing water nearly a foot deep. This is real agriculture, necessary, hard work and with no noticeable financial return.
Anyway it’s done, and is fenced and sheep proof (if anything can be said to be sheep proof.) Indeed we even had a couple of roe deer down the other evening, inspecting the results. Admittedly they cleared the whole lot with contemptuous ease but I’m not trying to fence in deer.
But because I’ve been busy, somehow I never got the blog done, which is a pity, because apart from bad taste jokes about laying dikes I’ve got some real news for once.

‘Justice 4.1 (Tsarina Sector)’ is to be published in paperback on the 1st March 2014.
The Amazon page is here in case you cannot contain your enthusiasm.

It is being published by Safkhet, and their page about it is here, with a sample of the story.