Ain’t no Justice any more?

There’s an old proverb, “Throw enough mud and you’ll get your hands dirty.” It’s from the same bitter school that came up with the other proverb, “Give a man enough rope and he’ll hang you with it.”

It’s just that over the last few weeks I’ve been intrigued by the sheer number of posts on Facebook ridiculing UKIP, or slagging off the Conservative party. Now I realise that a lot of people who read this blog are not UK based and don’t follow UK politics.

So in simple terms here is what is happening. In this country we have a cosy political elite which largely forms the leadership of all three main political parties. They’ve all got privileged backgrounds and take for granted a lifestyle that for many of us is unattainable. I well remember my disbelief when I discovered that the amount a Labour Prime Minster spent on his family’s summer holiday was more than I aspired to earn in a year.

It’s not so much as they’re out of touch, as they live in a separate world to most of us. Add to this the fact that the ‘party’ system is dying, with political parties having active memberships smaller than football supporters clubs.

In crude terms, issues that this cosy elite found too disturbing to deal with, or issues that they didn’t see as a problem, didn’t get dealt with. In fact they’d close ranks and brand anyone raising these issues as a xenophobe or a ‘little Englander.’ They might have been right in their assessment, but government by contempt and dismissive innuendo is no way to build community solidarity.

And UKIP spotted a gap in the market. They’ve hooked on to the issues the other parties wouldn’t touch with a barge pole. UKIP representatives are no more virtuous than those of any other political party, they’re no wiser nor are they more honourable. But by and large they’re new on the political scene, but even more important, they’re regarded with contempt by our cosy political elite.

But what the political elite hasn’t realised is that they’ve been regarding the opinions of the ordinary people of this country with contempt for years. They’ve never attempted to lead, to reach out and discuss and inform. They preferred to ridicule into silence. Who will forget Gordon Brown and the ‘bigoted woman.’    http://news.bbc.co.uk/1/hi/8649012.stm

Personally I suspect that the more they ridicule UKIP, the more people will vote for them. Not because they agree with UKIP but because we suddenly have a chance to rub a lot of smug and wealthy people’s noses in the dirt and humiliate them a bit.

It’s the same with political parties pillorying other political parties as ‘out of touch’ or as being composed of ‘toffs’. I don’t think they’ve realised how out of touch that makes them look. Not only that but as the public has come to the conclusion that they’re all the same, what they are doing is throwing mud and getting their hands dirty.

It was Plato who said “One of the penalties for refusing to participate in politics is that you end up being governed by your inferiors.”

It’s also been said by a number of people that, “The only thing necessary for the triumph of evil is that good men do nothing.”

Some people now seem to run the country, the rest of us just watch from the sidelines, staring with growing disbelief and posting cute cat pictures to each other on Facebook.

Perhaps we can see a reflection of our priorities in the relative coverage given to the loss of a Malaysian airliner and the kidnapping of a similar number of Nigerian school girls!

Why do ‘They’ allow this sort of thing to happen? 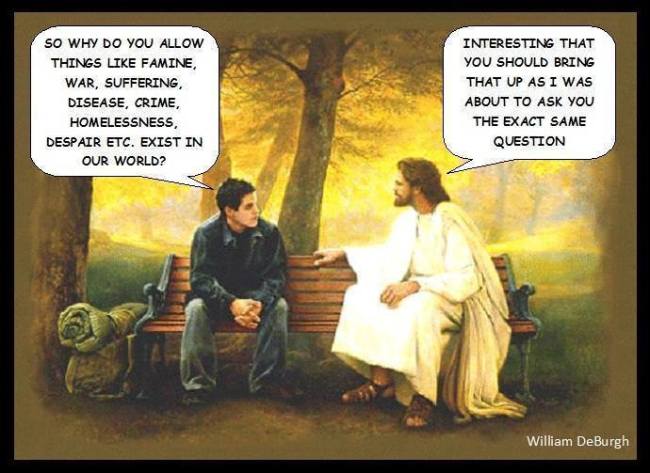 Yeah well, what do I know. Just ask the dog

As a reviewer commented, “This is a delightful collection of gentle rants and witty reminiscences about life in a quiet corner of South Cumbria. Lots of sheep, cattle and collie dogs, but also wisdom, poetic insight, and humour. It was James Herriot who told us that ‘It Shouldn’t Happen to a Vet’ but Jim Webster beautifully demonstrates that it usually happened to the farmer too, but far less money changed hands.

I, for one, am hoping that this short collection of blogs finds a wide and generous audience – not least because I’m sure there’s more where this came from. And at 99p you can’t go wrong!”