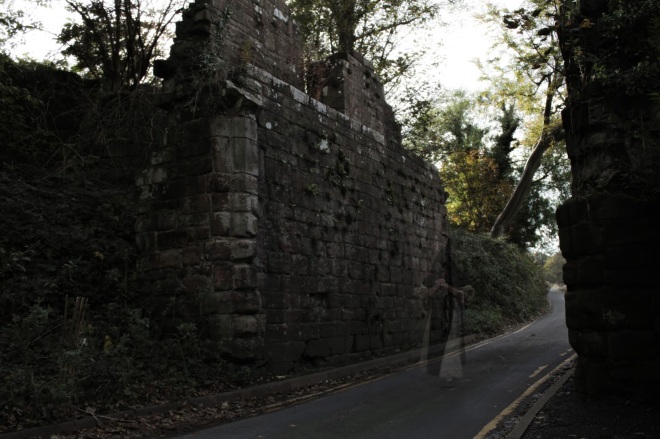 It’s all the fault of Sagger, but then this is Sagger’s story. I may have embroidered it slightly, but only in so far as I’ve taken the embroidery that was already worked into the story, and tried to put it into its proper context.

Sagger was and hopefully still is, just Sagger. Nice guy, lively mind. The last time I met him was outside the library when he asked me if I could recommend any books on the Spanish Anarchists.

But this story is earlier. It is probably set after the incident of the ‘Big Cat on Walney’ but perhaps before the time they ‘Summoned Asda.’

But still, I want you to picture the scene. There is Sagger and a few friends slouching about at the home of one of them. They’re at that age where it’s entirely possible one of a group will have access to a car, but most rely on push bikes to get about.

So a not particularly noteworthy group of young men, decent enough lads, just chatting and passing the time of day. They’re probably middle aged, married and respectable by now.

And as evening draws on they start telling ghost stories. Nothing unusual about that, but then they realise that one lad has to cycle home past Furness Abbey. Old, ruined and reputedly haunted. So of course they tease him about his trip home and suggest that he go the long way round so he doesn’t get scared.

And he tells them to go take a running jump at themselves (or some other such vernacular expression) and soon after that, because it’s late, leaves in the darkness for home on his bicycle.

Almost immediately the others grab what sheets they can, leap into a car, determined to get to the Abbey before him. Then covered with sheets they haunt the Abbey, lurking and loitering and allowing themselves to be glimpsed at various openings.

But frankly haunting a northern Abbey on a chill, dark, autumn evening soon begins to pall, so they stuff the sheets back into bags and walk back to where they parked the car.

Now, parked next to their car there is a police car; two policemen are looking at their car and are taking details. So the lads walk up to the police and say (and here I approximate,) ‘Good evening officers, and can we help you.’

To cut a long conversation (in a broad Northern dialect you’d probably not understand) short, it appears there had been a series of burglaries in the area. So what had the lads been doing?

Sagger, being Sagger, told them the truth; producing sheets from the bags as evidence.

So the police took their names and addresses, with the comment that, “If there have been any break-ins tonight, we’ll give you lads a call.”

So with several subdued, “Yes sirs,” and “Good night Sirs,” the lads climb into the car. Except for Sagger who stops and says,

“So you’ll check those names and everything on the computer then?”

“Wouldn’t it be really weird if you checked them and discovered we’d all been killed in a ghastly car accident here twenty years ago?”

The policeman just looked at him and said, “Sod off home.”

If you’re after gods and demons and whathaveyou

As a reviewer commented “This is Jim Webster’s third book and though it doesn’t carry on from the previous two it is set in the same fantasy world. We follow a young man named Freelor as he takes on a job to cover a winter time when he’s unable to get home, where he is due to marry. There are other sub-plots in this story and if you have read his earlier books, you will recognise the name of the city which falls and is destroyed by fire. One of the subplots concerns a shaman’s amulet worn by Freelor, which grows hot in the presence of the evil god Hkada whose followers are able to summon him. There are exciting battles and some serious temple raiding resulting in a possession by the god Hkada.

The story is a quest tale with Freelor leaving his usual haunts to undertake a journey to a temple where his friend, the academic Tolshin, hopes to find information about Hkada. It’s a fantasy classic and I particularly like some of Jim Webster’s phrases, for example, the merchant’s expression, “I keep my grandmother freshly washed and presentable, against the possibility of impulse buyers.” And the exchange between the soldier and his superior, “Just got my boots off for the first time for three days.” “Exotic pleasures of the flesh are reserved for officers. Get your boots fastened and get over here!”

5 thoughts on “A Furness Ghost Story”