The road from the Bigoted Woman stops here. 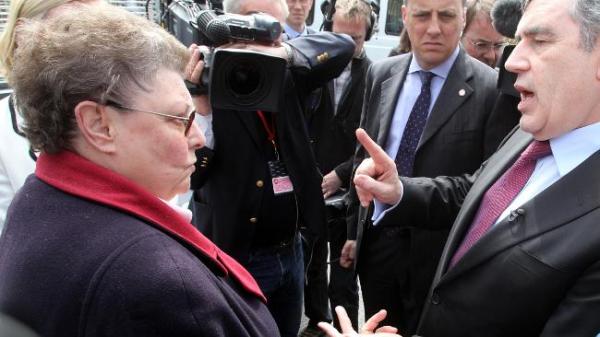 You cannot say that our chattering classes were not warned. The bigoted woman put a shot across Gordon Brown’s bows, but he ignored it. To be fair some of his MPs did take her points on board and made big strides in combating various unpleasant rightwing parties.

But the problem is that our politicians have got more and more out of touch. Whether it’s because so few of them ever do proper jobs, or spend much time working alongside ordinary people I don’t know.

There were tactical mistakes made. Trying to use ‘project fear’ into frightening the English and Welsh into obedience was always likely to backfire. People aren’t stupid. They can work out that when the IMF says that if the UK should leave the EU the continent would collapse into darkness and end up sinking into the sea, whilst at the same time the PM says that we’re so irrelevant we’d struggle to get the same deal as Norway; one or both of them has to be wrong, and possibly lying.

But there are other mistakes, more serious mistakes. Large parts of England and Wales feel they’ve been abandoned. A ‘remain’ supporter told me this morning that those who voted to leave wouldn’t get what they were hoping for. That’s when it struck me; a lot of these people don’t actually have any hope.

Stuck in towns where there are few decent jobs left, educated in ‘bog standard’ comprehensives, advised to go to university because “You might as well, you’ll never get a job that earns you enough to pay back your student loan.”

I know too many young people who are stuck in dead end jobs with no real hope of improving their lot.

The marginalised, the ignored, those who’ve been contemptuously dismissed, they’ve voted. Sometimes for the first time; people in their fifties registered specially to get their voices heard.

It was G. K. Chesterton who wrote

We hear men speaking for us of new laws strong and sweet,

Yet is there no man speaketh as we speak in the street.

It may be we shall rise the last as Frenchmen rose the first,

Our wrath come after Russia’s wrath and our wrath be the worst.

God’s scorn for all men governing. It may be beer is best.

But we are the people of England; and we have not spoken yet.

Smile at us, pay us, pass us. But do not quite forget.

Well are you happy? 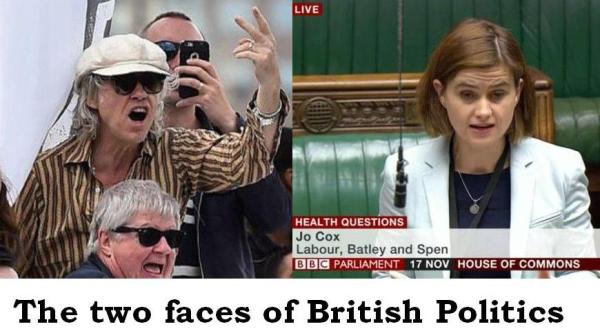 For years we’ve had increasing personal attacks on politicians, made by other politicians. No blow has been too low. We’ve seen it all, allegations of child abuse with no evidence to back them up, accusations that this party or that party would destroy the health service or the armed forces or the police or whatever

There’s an old Yiddish proverb. Throw enough mud and you get your hands dirty.

So now we have a situation where nobody trusts politicians because politicians told us that they couldn’t be trusted.

Bet you never saw that one coming did you!

Have you ever heard Sayre’s law? It states that “In any dispute the intensity of feeling is inversely proportional to the value of the issues at stake.” By way of corollary, it adds: “That is why academic politics are so bitter.”

Perhaps those screaming abuse at the ‘other lot’ merely do it to try and hide the emptiness within?

And now we have the two faces of British politics. An MP murdered and a millionaire throwing his money about to ensure a politician he disapproves of cannot get to make his point.

Hey there are politicians I disapprove off. But unfortunately I’ve not got the money to harass them. I’m only a citizen. All I can do is listen to the debate and then cast my vote.

That’s a course of advice I would recommend to others.

Perhaps if the political pygmies, who prance, preen and oversee the steady decline in our country thought more, spoke less, remembered the basics of courtesy and perhaps studied a little history, this country might be a better place.

What do I know? Just read something grown-up and forget them for a while

More of the wit, wisdom and jumbled musings of Tallis Steelyard. Includes the unexpurgated account of the Mudfold and Cockeren feud, the dangers inherent in light music, and how Tallis first met and wooed Shena.

As a reviewer commented, “The sheer ingenuity of Jim Webster’s short tales never ceases to amaze me as I work my way through this, and his other books.”