Can I mourn other peoples’ idols? 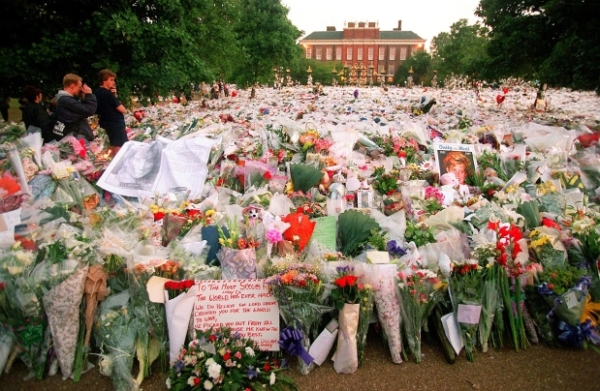 To misquote Kipling, “If you can keep your head when all around you are losing theirs, do you really understand the situation?” I don’t know about anybody else but there are times when I end up feeling somewhat semi-detached from the rest of humanity.

Take the sad death of Princess Diana. You know how people will say that certain events effected them so much they remember what they were doing when it happened? Well I remember what I was doing. I’d just got up and was getting myself a drink prior to going out to milk, so it was probably about 5:30am. I switched the kettle on and then put the radio on as well. I was expecting the Radio 4 news, instead I got solemn music. In my still somewhat sleep fuddled state my first thought was ‘We’ve had a coup.” The announcement of the death of the Princess, whilst sad, was almost a relief.

And then the whole country went mad. A local radio announcer I know was sent home to collect a black tie that he had to wear to read the news that morning. It’s radio, nobody would know whether he was wearing trousers never mind a tie!

And then there were the flowers, the endless flowers. We must have been importing from all round the world at that point. In my role as ‘rent a quote’ I was phoned by the local radio asking if I had any comments to make about the huge mounds of flowers and the outpouring of grief. I was probably not the right person to ask. I pointed out that piling that much greenery in one heap and not keeping the air out merely meant that you were making silage very badly, and within a day or two it would start going butyric and would start to stink. Strangely my comment was never broadcast.

Now all this was brought to mind by the various media stories about all the celebrities who are dying in 2016. I started wondering about grief and how we express it. I ended up comparing two funerals, both of which I saw on television. Obviously on one hand we have Princess Di in 1997, on the other the funeral of Sir Winston Churchill in 1965.

Now I lived among people who mourned the death of Churchill. He was mourned by men and women who’d buried sons, by women who had lost a husband, fiancé, or lover who they could never replace; by people who’d seen their entire family destroyed by the random chance of an enemy bomb which destroyed that house and not this one. He was mourned by people who had experienced a depth of grief that most of us struggle to empathise with.

And now we’ve got a lot of celebrities dying. I had a look at the BBC website.

Pre-prepared BBC obituaries that ran on television, radio and online

The advantage of using pre-prepared obituaries is that they’re people accepted as celebrities ‘before the event.’

Way back I remember reading the memoirs of a US newspaper reporter. When he’d been younger, he and a friend working for another paper in the same city had ended up in competition to see who could find the most crime stories. Between them they created a crime wave, and there was a lot of public protest that the streets were no longer safe and ‘something must be done!

Finally the city police chief called them into his office and carpeted them, pointing out that however you measured it, crime was actually falling, and all that was increasing was the reporting and perception of crime.

Is this linked somehow to the fact that as a population we seem to like a gratuitous outpouring of emotion? I suppose if it’s over a celebrity you never met and your only connection was you bought a couple of albums when you were sixteen then it’s hardly going to be too devastating unless you want it to be?
Is it an inevitable side effect of two generations without a major war to give people a real sense of proportion? Are Syrians clinging to each other desperately weeping because of the passing of George Michael?

Or perhaps we somehow missed the point worrying about a few celebrities given that we lost 456 dead in Afghanistan? Given that each one of those comes with grieving family, and given that there are over 2,000 wounded in action, many of them very seriously indeed, perhaps we ought to pull ourselves together.

And then there are the lads and lasses who made it home with no physical scars but with PTSD, what about grieving a bit for them. I’ve a friend for whom Bonfire night is hell.

Read about a real celebrity!

9 thoughts on “Can I mourn other peoples’ idols?”