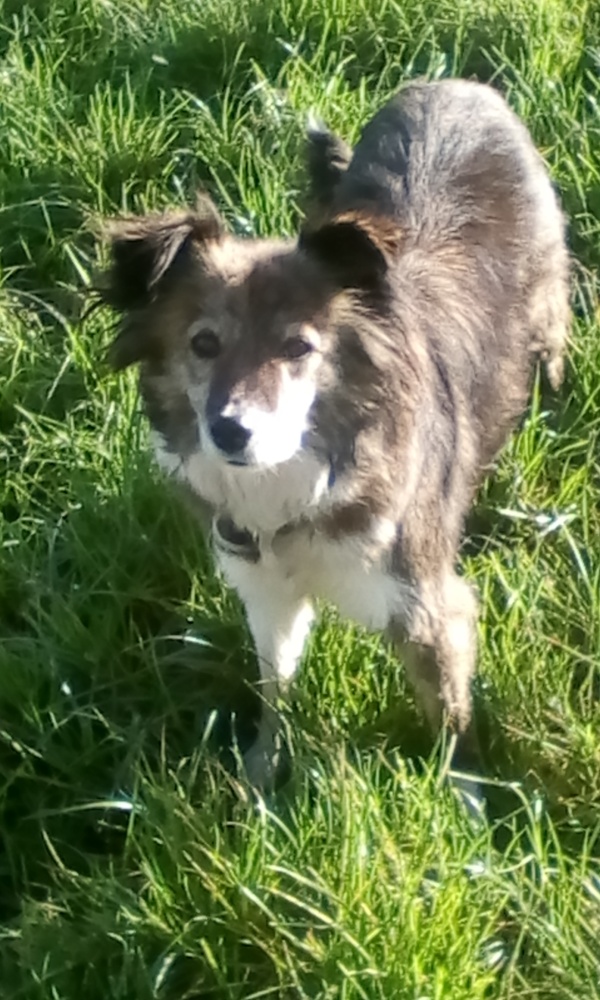 Feeding sheep this morning and I took some tub to a dozen gimmers (ewe lambs kept for breeding; these are nearly a year old). They had been chewing some grass off elsewhere but are now closer to home. I walked in with the bucket, shouted to them and rattled the bucket.

They looked up, saw the bucket and came towards me. Then they saw Sal and stopped abruptly. Sal watched them, they watched Sal. Nobody moved. The gimmers drifted forward a little. Sal continued to watch so the gimmers stopped and watched her. Then Sal shrugged and drifted off to follow a scent trail that interested her. With this the gimmers made their way towards the feed which I’d now put into their troughs.

But there were only eight of them, where had the other four got to? I could hear bleating from over the crest of the hill, and suddenly the other four appeared, saw their friends eating and hurtled towards us. Then they noticed Sal. Separated from their ‘flock’ they just accelerated. Sal who has had to deal with this situation before made damned sure she wasn’t between the sheep and their feed.

It did strike me that with her experience of the balance between greed and fear Sal ought to be producing expensive training courses for investment managers and similar. As it is I suspect that she’s too wise to get caught up in the rat race. Growing ridiculously rich isn’t something that seems to appeal to the Border Collie.

Anyway we went to look at the wintering hoggs. We got there and one had got its head caught in the netting. They’re Swaledales so are horned sheep. Sal shot through the gate to deal with the hogg. I parked the quad and followed her. The problem is that in the presence of Sal the hogg can just keep charging forwards which achieves nothing. (Except perhaps to break the fence posts!)

Just as I was shouting, “Sit down Sal“,  to ensure this didn’t happen, she got in front of the hogg which went backwards, unentangled itself and ran off. Sal gave me a look of dog who has absolute confidence in her abilities. She has no interest at all in selling out and training investment managers. She passed the test, she will diminish, and go into the West, and remain Sal.

Oh and more of Sal’s antics appear in

Now available in paperback
As a reviewer commented, “This is the third collection of farmer Jim Webster’s anecdotes about his sheep, cattle and dogs. This one had added information on the Lake District’s World Heritage status. This largely depends upon the work of around 200 small family farms. Small may not always be beautiful but it can be jolly important. If you want to know the different skills needed by a sheep dog and a cow dog, or to hear tales of some of the old time travelling sales persons – read on! This is real life, Jim, but not as I know it.”

23 thoughts on “Fear and Greed”