Roe deer and Herdwicks, oh my. 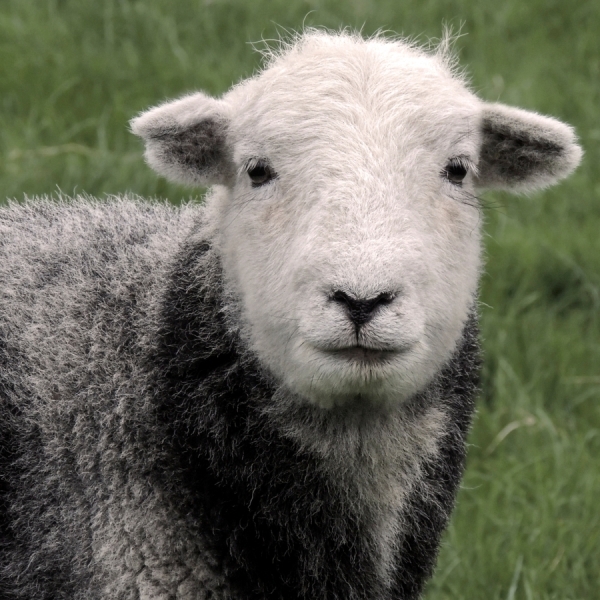 This afternoon the weather had somehow overlooked us. So far today it has neither rained, snowed nor pelted us with hail. Given that yesterday had managed all three plus thunder and lightening, we were really expecting fog or perhaps a rain of frogs today. So mere weak sunshine seemed something of an anticlimax.

Still I took advantage of the freak weather to walk down to the bottom land and see what things were like. In theory we could be putting ewes and lambs down there in a month so it’s always a good idea to check what conditions are like.
It’s heavy land, we rarely had cattle on after October, unless it was a particularly fine and dry back end. This year the sheep came off early in November. The result is that when I went down, whilst there was a lot of standing water, nothing was paddled. Also there was some grass. It’s managed to very slowly keep growing and provided things go sensibly for the next month, it should be fit to put sheep on. We just need some dry weather for a change.

Mind you, as soon as I got down there, Sal set off and three Herdwick hoggs came running up out of a beck edge where they’d been hiding. They were nothing to do with us. I did, once, take in wintering Herdwicks. Keeping them in is like trying to wheel smoke in a barrow. They’re fell sheep and whilst they might indeed be hefted to a particular bit of fell, that fell is the far side of Coniston at the moment and probably covered in snow.

Herdwicks down in the lowlands are a bit like vets at a conference somewhere. Relieved of all responsibility for being in the right place at the right time vets tend to hit the bar and Herdwicks tend to just go where they want, ignoring fences, becks, or whatever.

So the three hoggs set off with Sal following them. Close enough to keep them moving but not so close that they’d panic. I followed at a more sedate pace, getting a feel for the ground and looking for grass. Eventually I almost caught up with them and stopped. The Herdwicks had halted and were watching Sal with a degree of nervousness. Off to one side, well out of the way, were a pair of Roe deer who were watching both Sal and the Herdwicks with benign curiosity. They gave the impression that they were fans of ‘One man and his dog’ and were waiting for the bit where I whistled just so and Sal would put one hogg in one field whilst loading the other two into a quad trailer.

I just shouted “Send them on Sal,” and she advanced on the hoggs who turned and fled across the beck to join their less adventurous flock mates. The Roe deer, doubtless disappointed that I’d sunk so far as to use voice commands, faded seamlessly away into the hedges and rushes.

Sal trotted back to me with the look of a dog who’s quite enjoyed her afternoon.

But as an aside, it struck me that I’d not yet got round to mentioning that I’ve got another novella out.

Rather than his usual collection of anecdotes, this time Tallis presents us with one gripping escapade. A tale of adventure, duplicity and gentility. Why does an otherwise respectable lady have a pair of sedan chair bearers hidden in her spare bedroom? Why was the middle aged usurer brandishing an axe? Can a gangster’s moll be accepted into polite society? Answer these questions and more as Tallis Steelyard ventures unwillingly into the seedy world of respectable ladies who love of sedan chair racing.

As a reviewer commented, “In this entertaining book by Jim Webster, the reader is treated to the ins and outs of sedan chair racing in Port Naain. Sedan chair racing comprises of chairs, transporting various wealthy ladies of impeccable social standing, borne by fit young men called sedan chair bearers, which raced each other through the streets. The ladies are not at all good sports and all sorts of interesting cheats take place during these races which are bet on by those in the city with a propensity for gambling.

We are introduced to a number of intriguing characters. Mistress Bream is one, an elderly lady whose decreased mobility is depriving her of the fun and social interaction she yearns for. Her various supporters arrange to have a special chair with wheels built for her and Tallis, a poet and the hero of the story, is invited to visit and view her new acquisition. This is the start of an extraordinary tale the results in Tallis seeing Mistress Bream’s son chasing a pair of sedan chair bearers with an axe and being coerced into finding out what has caused this odd behaviour. Tallis’ quest for the truth of the matter leads him to meeting Mistress Graan, the wife of a local gangster, who wishes to be seen as more cultured. Tallis agrees to assist her with hosting a poets soiree and he soon becomes embroiled in her ambitions, including her desires with regards to the sedan chair racing in the city.”

8 thoughts on “Roe deer and Herdwicks, oh my.”