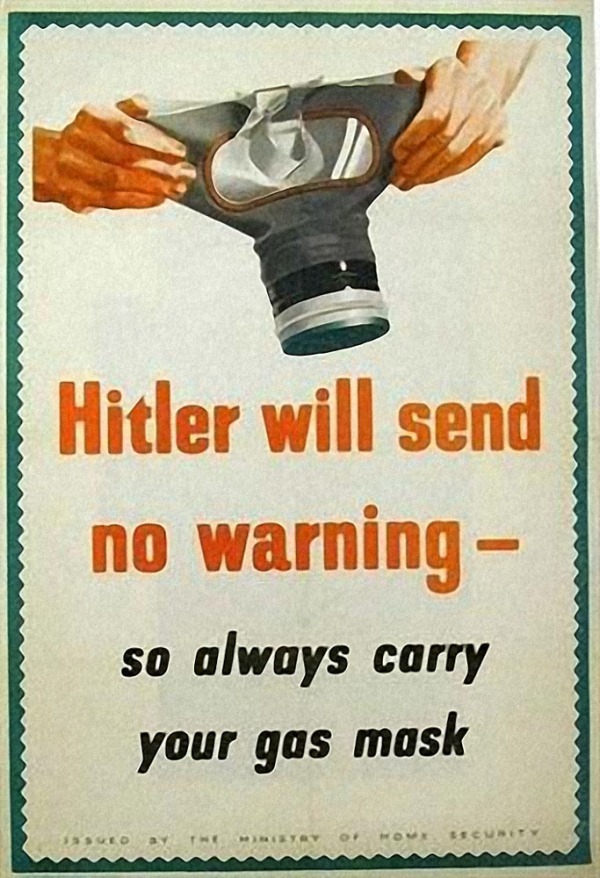 I know there’s a lot of hysteria about at the moment, but I felt things had got a little silly when one person claimed that the current situation in this country was like 1939. I am afraid I pointed out, somewhat brusquely, that in 1939 they had a special census because it’s good to know how many young men you’ve got who are available to die for their country. Also they were frantically issuing gas masks and making plans to evacuate people. Somehow I seem to have missed these preparations.

But actually it started me remembering. I don’t remember 1939, but obviously my parents did. Indeed I must be one of the few people living who used a gas mask of wartime vintage.

Basically I’d be ten or eleven at the time and we had a few hens. Ours were technically free range, which is why we ended up not having them because back in the 1960s you just lost money on them because the price of eggs was so low. But between batches of laying hens you’d clean out the shed and fumigate it because hens, especially free range ones, picked up and spread all sorts of mites and similar.

And given my father had plenty to do anyway, and fumigation could wait for the weekend, I’d do it.
He mixed some stuff up in a stirrup pump bucket and I would set to and would spray the entire inside of the hut.

It was not pleasant stuff, so I went into the house and dug out my mother’s old gas mask. This is the one she took to school with her every day between 1939 and 1945. If you didn’t have it with you, you were sent home to get it. Wearing the mask I happily sprayed away and got the job done. Fascinating would you learn. I just the other day saw a warning notice saying that on no account should you wear or go anywhere near wartime gas masks because some of them used blue asbestos. There again, some of them didn’t.

The hut I was spraying had a bit of a history as well. There were two hen huts. Both about fifteen feet by thirty. I cannot remember when they first appeared, they’d always been there. I think my Grandfather had picked them up for £2 a piece or something. Anyway I remember them being moved, and perhaps ten years later I remember them being moved again, but this time they were converted into calf accommodation. Basically the bottom three feet was sawn off and replaced with four feet concrete block walls. They worked really well. Not only that, but every summer one of my jobs was painting them with creosote to preserve the timber. Every few years I’d put more felt on the roof and paint that with bitumen.

Anyway about thirty years ago it was obvious that the rooves were completely knackered. It was probably time we just demolished the buildings and replaced them. But you know what it’s like. Money’s short and actually they were still useful buildings. So I fastened timber battens to the rooves and then put a corrugated iron roof on top of the wooden one. This worked really well for another thirty years.

Alas, now, after more than sixty years hard service, they are ‘no longer fit for purpose.’ They need so much replacing it would effectively be a rebuild and when you’d done it, you’d end up with a calf building that seemed like a good idea fifty years ago.

So finally they’ve been cleared out of the way, taken down before they fell down. You could say that what’s left looks like a bomb site, but only if you were given to serious exaggeration.

In case you’re at a loose end and have nothing to read, did I mention that the following is newly available?

As a reviewer commented, “Another set of stories from Poet Tallis Steelyard. Amongst other short tales, he advises on selling your written word. The world, even the invented world of Tallis and friends, has much to say on this. As we know, people you’ve never heard of will offer you a book on how to sell your novel and get rich. Jim Webster has once again sorted the gold from the dross and presented it as stories. There’s a lot of truth in them!”