Not everybody likes the wet

When I let Sal out this morning, she showed no real signs of enthusiasm. She followed me, picking her way fastidiously around the water. She abandoned this when she discovered that, in reality, the water, be it slush or rainwater, was everywhere.
When I woke up this morning, there was snow cover of a sort, but the rain had already started. Apparently for a while Barrow was cut off. This isn’t because our highway authority is incompetent, it’s just that there’s effectively just one road and if an artic skids on the wrong roundabout, we’re cut off. Yes there is another way out, but that goes up through the lakes and in summer it’s effectively blocked by tourists, and in bad weather it’s not what I’d call a pleasant drive.

But Sal and I went to feed round a few heifers, who to be fair were glad to see us. Certainly they seemed happier that Sal was. Although even she perked up when she discovered that there was still snow, of a sort, on the lawn. She genuinely frolicked at that point and rolled in it enthusiastically. 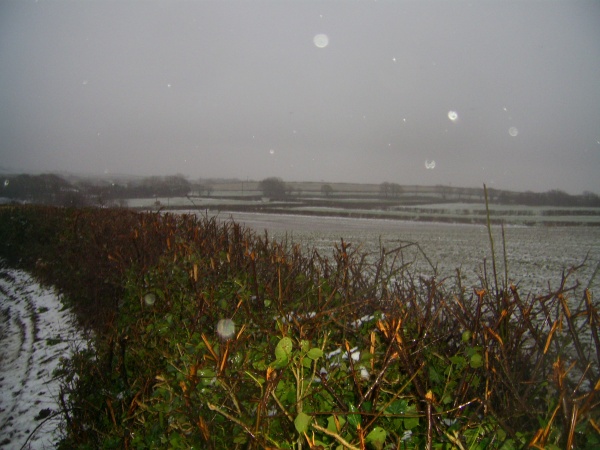 Then it’s made a half-hearted attempt to get light as well. To be honest I think today is going to be one of those days where we work in the gloom.

The other problem with snow and slush is that it has to be moved. So scraping out the yards takes twice as long because you aren’t merely shifting the muck, you’re shifting the slush as well.
Remember that we’re an area that is geared up to handle water. There are places in the UK which aren’t used to it. About thirty years ago I remember travelling with a family friend in the south and it threw a really heavy shower. So heavy they were wondering about pulling off the road, they’d never really seen anything like it. This rather surprised me as we’ll get showers like that most months, especially in winter.

But what really staggered me was suddenly everything was flooded. Here in Cumbria, our highway engineers know that you have to have drains along the sides of roads. Not only that, but whilst our local authorities do get caught out at times, they do know the importance of keeping the drains clean.

And me? I’ve got one waterproof drying, and am wearing my previous pair of working trousers. This is because my current working trousers are sodden and are hopefully drying in from of the Rayburn.

Working trousers have to be really bad before they get thrown out, they’ll always come in for an hour or two during wet weather. If, when I go back out, this pair get soaked and the ‘good’ ones still aren’t dry, there’s another pair that I can put on. Admittedly they’re not the sort of garment you could wear in company but still they’ll keep the wind off when worn with a long waterproof.

Sal does keep having difficult days

As a reviewer commented, “I always enjoy Jim’s farming stories, as he has a way of telling a tale that is entertaining but informative at the same time. I’ve learned a lot about sheep while reading this book, and always wondered how on earth a sheepdog learns to do what it does – but I know now that a new dog will learn from an old one. There were a few chuckles too, particularly at how Jim dealt with unwanted salespeople. There were a couple of shocks regarding how the price of cattle has decreased over the years, and also sadly how the number of UK dairy farms has dropped from 196,000 in 1950 to about 10,000 now.
Jim has spent his whole life farming and has acquired a wealth of knowledge, some of which he shares in this delightful book.”

6 thoughts on “Not everybody likes the wet”