Welcome to the world’s most expensive broadband? 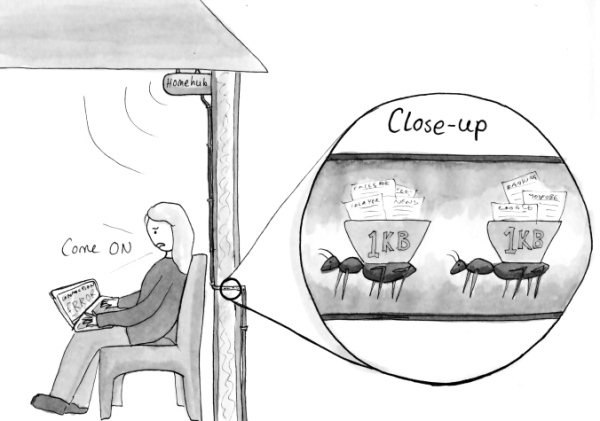 Well it’s official. We’ve had the formal notification. To quote,

So there you have it. I must admit that it struck me that this wasn’t so much a quote as a case of them saying, ‘Bog off and bother somebody else, kid.’

They were supposed to send me a breakdown of the cost, and now they have.

Planning and Other Issues=10%

I confess that if anybody presented me with this as a tender for a job I wanted doing, I’d probably glance at it, giggle, and drop it in the round filing cabinet before looking at the tenders from the professionals.

What did intrigue me was the comment about the number of homes passed. We had a quick look at Google maps to work out which they would be. Whether Openreach want me to negotiate with everybody to chip in I’m not sure. Or perhaps they just expect me to pay for it all and then they can phone them up and offer them a cheap connection? But one of the potential people on the route did ask Openreach about getting broadband a couple of years ago and was told they could have it for £10,000. They walked away from it. I suspect most of the ten will share the same robust disdain for being screwed. Indeed in some cases they’ll already have moved over to mobile broadband. So I would rate the chances of getting any of them to go shares on £104,311.20 as zero.

I decided to run through a few costs to produce a rough and ready estimate of my own. Now the nearest cabinet to us with fibre to it is just under two miles away, so we’ll call it three kilometres. This cabinet, Cab 26, is the one we’re connected to now. Admittedly our connection is an ad hoc assortment of elderly copper and nicely rotting aluminium but that’s beside the point. Cab 26 is the cabinet they have hooked in all those locally who get fibre broadband. Indeed the fibre optic cable that runs past the top of our lane to serve the village apparently comes via there. To the best of my knowledge the cable to the village is ducted, so they’d only have to thread a new cable through the existing ducting. However let us assume that we need to dig a trench the full way. It’ll be easy enough as it’s along a very wide grass verge on the side of the main road. Then when it gets to the top of our lane let’s assume we can bury it rather than string it from the poles that are already there.

So I got a quote from the chap I turn to whenever I need a digger. He’s dug and backfilled for water, gas, and electricity and he cannot see any problem with doing an armoured fibre cable. (Somebody I know who has done fibre optic cable work all round the world has mole ploughed the cable in in the past.)

Anyway, his bill for digging and backfilling the three kilometres would be £4,000.

Trying to find a price for cable itself is tricky. The chap I know who has laid cable all round the world reckoned they used to estimate it at £500 a mile. But he worked with people who dealt in serious, ocean spanning quantities. I googled prices for cable, and there, tucked away amongst all those companies just trying to sell me broadband, I found one selling cable. I went onto the page and ended up in a chat with a lady in China! I confess I only realised it was China when she asked if we had a Chinese shipping agent! But they could provide me with direct burial type 12 core fibre cable, fob Shanghai for $386.88/km. So the cable would cost £878.59 plus shipping. It’s not a long way from my neighbour’s estimate of £500 a mile. You do then wonder just how much Openreach are charging to connect up at each end?

But I realise these are very simplified figures. So I thought I’d look round for somebody more professional who knows how to charge. So on an American website, I found a company that does a lot of connecting rural areas. This company was quoting between $18,000 and $22,000 per mile. Reading it, this sounded like they were doing it properly with ducting so that you could add other customers later and there’d be access points and suchlike. If you’re putting in ducting, there is obviously a considerable extra cost, but then you do get to use cheaper cable. (I was quoted, Duct type 12core ：$285.71/km fob Shanghai.)

We’re struggling to get to a third of the Openreach estimate here. I’m really scraping the bottom of the barrel trying to pad out the bill.

Now people have suggested we go for mobile broadband. If we had useful mobile signal inside the house we would consider it. Others have suggested we put together a ‘community scheme.’ The problem is, the community has been done, we’re the ones that weren’t worth putting on the scheme. By my reckoning we’ve got half a dozen households to connect up and they don’t really fit into the same scheme. None of them have the slightest interest in broadband at this price.

And remember it’s not as if we’re all that isolated. I can walk to the telephone exchange in the middle of town in an hour and ten minutes.

Never mind, there’s always a good book to turn to

The fourth of these collections of anecdotes, rants, pious maunderings and general observations on life. Yes we have dogs, quads, sheep and cattle, but in this one we follow the ‘lambing year.’ It starts with ewes being put to the tup in late autumn and finishes in summer with the last of the laggards lambing.
But as well as this we have endless rain, as well as sleeping in a manger. Be brave and you’ll meet young ladies in high heeled cowboy boots, Sir John Moore of Corunna, brassieres for cows, and, incidentally, David Essex.

As a reviewer commented, “Yet another quiet, but highly entertaining, amble through Jim Webster’s farming life, accompanied by Sal, his collie extraordinarie.
Sheep, cattle, government eccentricities and wry observations are all included.”

53 thoughts on “Welcome to the world’s most expensive broadband?      ”