Copping up not copping out

Every so often we have to widen a gateway. Actually it’s a ‘rolling process’ that has been underway on this farm for nearly a century. I can remember my father telling me that before I was born, he’d had to go round and widen all the gateways. Basically they were all only about five feet wide. This was just about enough for a horse to pull a cart through. With tractors they had to widen them again because a tractor turns differently to a horse and you need more room, even if the tractor is pulling the same implement. So they widened all the gates so they were all at least seven feet wide.

But tractors got bigger. Now if you were turning into a field from a main road, a gateway seven feet wide was perhaps still possible. But here we have to work in narrow lanes, so the gateways had to be made wider again. This time we took them up to ten feet. Job done, we’ll never have machinery wider than that.

And of course time marches on, tractors have to do more work and need more power. But also, to ensure they do less damage to the soil, they need wider tyres. Also with four wheel drive, they need a lot bigger wheels on the front. Ten feet wide was barely adequate. Not only that but by this time I was largely working on my own. So when moving cattle I wanted a situation where I could move them along the lanes with just me and a dog.

So a lot of the gates were widened again. But this time they were made so that they were wide enough so that when the gate was opened, it came out across the lane and blocked it off. This mean that I didn’t need anybody standing there to turn cows. To be honest, the system worked really well. I would open the gate, shout to attract the cow’s attention, and Jess would run into the field, get behind them and would fetch them out. I’d walk down the lane ahead of the herd so I was in place to turn them into the yard at home and Jess could calmly walk them down the lane. If I could have trained her to shut the gate after us, the job would have been as near perfect as possible.

But anyway, this spring we had to widen a gate that had somehow missed being done. We hadn’t needed to do it before but now, with the bigger machines contactors use, something had to be done. So we did it. We had two big steel gate stoups recycled from a previous job, so when somebody was passing with a digger, he widened the gateway and dug in the two new gate stoups

The problem is that it left a gap between the hedge and the gate stoup. Now what you have to remember is around here, a hedge sits on top of a bank. Now the bank isn’t just a simple bank of soil. They’d be eroded away in no time. The bank, or dike cop, is armoured, or cladded, with stone. So I decided I’d fill the gap properly by copping it up.

First get your stone. Because in years to come the stone will be invisible, any rough old stuff will do. Then dig out a bit of a trench at the bottom of the dike cop. Put some nice big stones in to act as a foundation.

Fill up behind them and around them with loose soil and then level the whole thing up with a layer of turf to bind it. Then put your next layer of stone on. 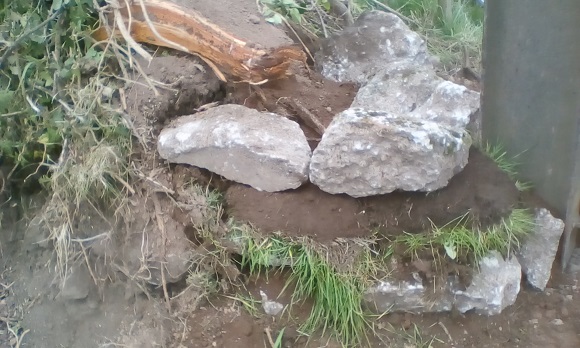 Fill up behind that with lose soil, top off with turf and you’re ready for your next layer of stone. When it’s high enough, just cap it off with a layer of turf. 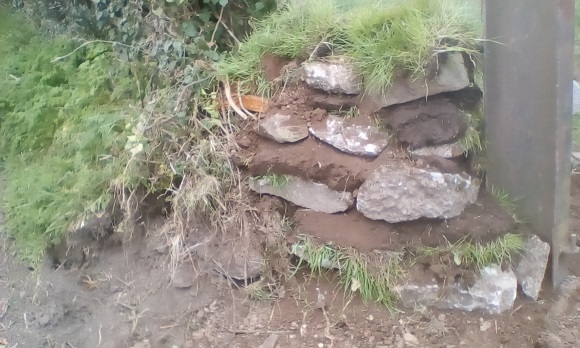 Finally lay the nearest hedgerow trees across it, leave for five years and it’ll look as if it’s been there for ever.

And if you want to meet the lady who I could never train to shut gates behind us,

As a reviewer commented “This is a selection of anecdotes about life as a farmer in Cumbria. The writer grew up on his farm, and generations of his family before him farmed the land. You develop a real feeling for the land you are hefted to and this comes across in these stories. We hear of the cattle, the sheep, his succession of working dogs, the weather and the neighbours, in an amusing and chatty style as the snippets of Jim Webster’s countryman’s wisdom fall gently. I love this collection.”

28 thoughts on “Copping up not copping out”