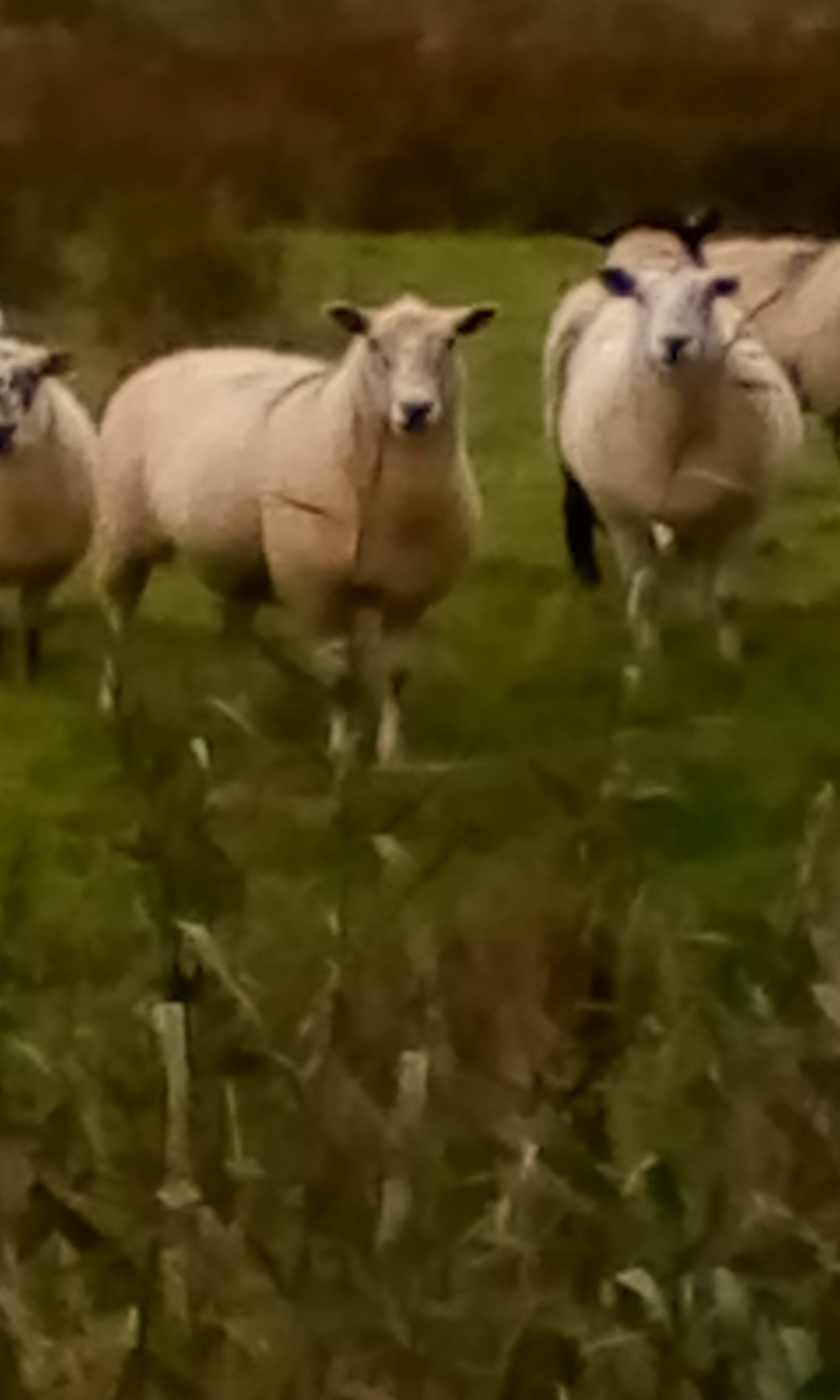 One day I will write a blog about how hot and dry everything is, how the dust hangs in the air, and the sun beats mercilessly down on us. But today is not the day. It’s still wet. In fact it’s beyond that, if you’ll pardon my French, it’s sodding wet.

You know when a day is out to get you. I backed the quad onto the quad trailer and went to hook the trailer on. The lock that fastens over the ball hitch wasn’t working. Whether it’s jammed with mud or what I don’t know, I made an executive decision that this wasn’t a problem I was going to deal with in the pouring rain. So I put the old trailer on.

This is twice the weight and probably about twice the width. It’s not a bad trailer but does have its issues.

So I put the feed in the trailer and Sal and I set off to feed the first lot of sheep. Of course I met a neighbour in the lane, and of course he was driving in the opposite direction is a reasonably wide vehicle. I pulled off the road into a gateway but of course with the old trailer on, it was still hanging out into the road. But with a bit of jiggling we managed to get past each other. So now I’m mildly wet.

In to see the first lot of ewes. This involves walking through wet sheep who’re surging round you. They’re coming up behind you at just the right height to hit you behind the knee. If they walk across the front of you or overtake you to the side, well they rub a sodden wet fleece all over your legs.

But everybody has their food, everybody is happy. (Except Sal, who isn’t entirely happy because sheep who see food being poured out for them will run over the dog to get to it before their mates do. Sal finds this lack of respect distinctly hurtful to be honest.)
But anyway, I’m now merely wet.

Off to see the second lot. They’re furthest from lambing, get a lot less feed, but perhaps because of this seem even keener to get to me before their mates do. Sal has abandoned any thought of maintaining order and is merely rolling in the coarse grass, perhaps as a way of having a bath. Both lots of ewes are out on some land that never got mown last year because the idea was to make hay. The weather conspired to ensure that hay was never made. So the sheep are ‘chewing it off.’

There is a school of thought within agriculture which says that actually you shouldn’t waste time and money making hay or silage for winter, but should just leave the grass growing in the field and eat it off in situ. It’s not something I’ve dared to do, and I’ve got my doubts about whether it’s the sort of feed which can support new calved dairy cows. But on dryish ground with growing cattle I can see it might have a place. But still, at the moment, we’re briefly and accidentally at the cutting edge of grazing management. Mind you, I suspect that like many farmers over the last five or six thousand years, we’re just making the best of a bad job and putting a good face on it.

Next to look at some store lambs for a neighbour. Turn uphill and thanks to the heavy trailer frantically have to drop a gear. Sal looks on as if to ask what I’m playing at. I’m now travelling more slowly that she likes. Shrugging off the unspoken disapproval of a Border Collie we make it to the store lambs and miracles of miracles, none of them seem to have got themselves entangled in hedges, so I don’t have to get wet pulling one out. Instead I just get wet driving round the perimeter to check. But still, I’ve been sodding wet before and I’ll doubtless be sodding wet again.

Finally off to see the wintering hoggs. The age of miracles is still with us because they’re all at the bottom end where I can see them all from the road. This saves me having to take the quad into the field, through a gateway which is largely underwater. It does mean I’ve got to turn quad and trailer round in the lane, which isn’t too bad with the smaller of the two trailers, but of course, I’ve got the heavier trailer to manoeuvre in the pouring rain.
Anyway, job done, everybody fed, checked and otherwise monitored. Home again, drop the trailer off, put the quad away, fasten Sal up and in for coffee. But before the coffee, everything I’m wearing is dripping wet so goes into the washing machine.

Except, strangely enough, for my socks. Normally the water runs down your jacket and trousers and pools at the bottom of your Wellingtons. I think that because I was sitting on the quad, my socks somehow stayed dry. Ah well, let’s be thankful for small mercies.

Also let’s be thankful for the fact actually the day wasn’t too bad. On a bad day, you have to put a second lot of soaking clothes into the washing machine, and retrieve the first lot from the tumble-drier.

If you want to complain about it, I recommend you go direct to senior management

As a reviewer commented, “

Jim Webster’s stories make me nostalgic for a world I’ve never known – and probably am not sturdy enough to survive. His affection for his charges, the ewes and the lambs, is evident when he points out they are smarter than horses (horses have better PR). His warm tales about his sheep dogs make me want to own a dog (I’m not a dog person, and these are intelligent farm worker dogs, not pets). It’s the straightforward and down home way he writes about the daily life of someone who’s been a farmer since a child, through all the wavering government support and lack thereof, through the plagues of the farm life, in a way that shows the depth of his love for his home and profession. Think ‘James Herriot, Farmer.’

I’m stopping to write this review at the end of the 8th entry, labeled, ‘Occasionally you get it right,’ because he does – and I want to savor the rest of them slowly.

Jim Webster is a writer – I can give no higher praise. Read him, and you may be a little closer to what it really means to be a sheep farmer, as close as you can get. You get all the good stuff. It’ll warm your cockles.”